Which will outperform in 2020? Gold? Or Equities? 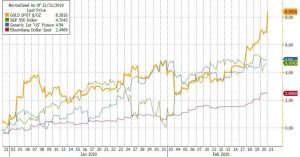 Peter Schiff joined a moderated debate on the subject at the Orlando Money Show. Peter teamed up with Rick Rule to argue for gold, against Louis Navellier and Jeffrey Saut, who contend the stock market is still the place to be. Mark Skousen moderated the debate.

https://youtu.be/LTgOXiy-mTU
Interestingly, even Navellier admitted that the stock market is getting “a little bubbly.” He said it looks like ’99 all over again – the year before the dot-com bubble popped. But he still thinks there’s money to be made.

Skousen set up the gold argument by bringing up the fact Mark Mobius says buy gold at any price because interest rates are so low and gold is relatively cheap.

Rule said the gold vs. stocks debate is a little bit silly. It’s not necessarily one or the other. The stock market is a market place to buy and sell stocks. Why would you be against the market? Why would you be against every individual company? On the other hand, Rule said he thinks gold is very under-owned. He pointed out that even a reversion to the mean in gold investment would quadruple demand for the yellow metal.

Peter pointed out that gold is beating the S&P 500 this century. The key is to look at what is going on in the broader economy.

We’ve got quantitative easing. We’ve got negative real interest rates. We’ve got massive deficits as far as the eye can see. This is not the same dynamic that we had. You can’t earn. Twenty years ago, 30 years ago, you could put your money in the bank and you could earn 5 or 6%. There was a reason not to own gold becuase there was an opportunity cost. You could actually get interest on your savings. Now, you can’t do that. In fact, 20, 30 years ago, central bankers claimed that they wanted price stability. Now they claim they want inflation. They want prices to go up by at least 2% a year. If they’re not going up 2% a year, they’re not happy. So, the central bankers are telling you if you hold currency, you are going to lose. So, gold is your only alternative.”

Rule took on Warren Buffett, concluding if you’re not Buffett, you need to own some gold.

At one point, Skousen showed off a gold peso he carries in his pocket. He asked Peter and Rick why they didn’t carry gold around if they’re such big gold bugs. Peter said he had too much to carry around.

Peter took issue with Naveillier when he said the Fed is worried about the lack of inflation.

That’s nonsense. And in fact, what they are the most happy about is that their inflation has not shown up in a bigger way in the CPI. The last thing the Fed wants to have to do is fight inflation because it can’t. The way the Fed is able to justify keeping interest rates as low as they are is by claiming there is no inflation, claiming that we’re below 2%. Well, what happens if we actually get to 4%? Or 5%? How is the Fed going to put that genie back in that bottle? How is the Fed going to take interest rates up to six or seven or eight percent when we have all this debt? They would force the US government into default.”

To close out the discussion, the panel talked about the possible impact of presidential politics on the markets. 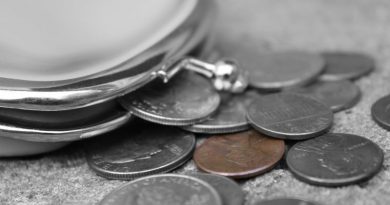 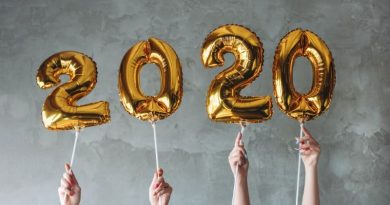